Economic Recap: U.S. consumer sentiment ticked up in early September from historically low levels as Americans felt slightly better about the economy, while equally expressing uncertainty about the future. The consumer sentiment index, a reflection of consumer attitudes on the state of the economy, rose slightly in early September but has been down from a year earlier. While consumers were more optimistic about the near-term economic outlook than earlier this summer, when inflation touched a four-decade high, they expressed more pessimism about long-run economic prospects. 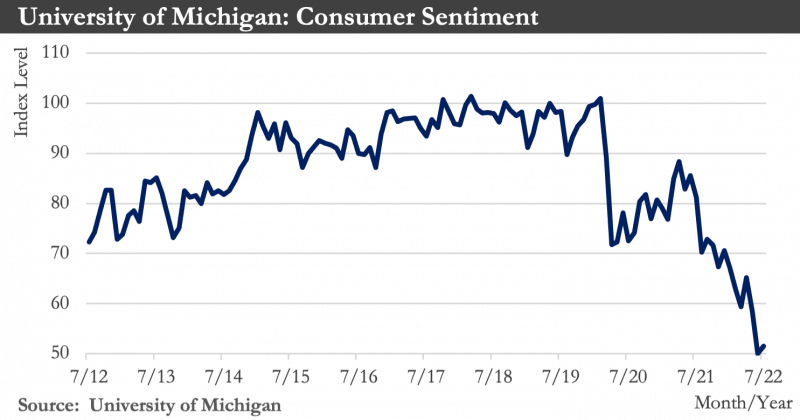 Since June, inflation has proven to be persistent, while the labor market has remained strong despite signs of a slowdown in some parts of the economy. While falling gasoline costs held down overall inflation in July and August, climbing housing costs and prices for services have kept inflation elevated.

Other economic data in August and September showed the U.S. economy appeared to be running lukewarm. Retail sales rose in August, largely due to increased spending at auto dealerships. Excluding motor vehicles and parts, sales were down 0.3%. Separately, industrial production declined a seasonally adjusted 0.2% in August, due to a sharp drop in utility output, reflecting weather conditions. A continued bright spot was the labor market. Jobless claims, a proxy for layoffs, fell in August and September. Continued strong job growth – employers added 1.1 million jobs in the past three months – and rising wages have given consumers a tailwind, even as they have grappled with rapidly rising prices for everyday goods.

All of these developments have kept the Federal Reserve on track to raising its benchmark interest rate to slow demand and inflation.

Economic Outlook: Since June, the U.S. economy has been forecast to slip into recession in 2023, and the Fed’s firmly stated resolve to bring inflation to heel reinforces the conviction that the U.S. economy is set to contract modestly in coming quarters. The Federal Open Market Committee (FOMC) has raised the target range for the federal funds rate by 2.25% since March, and another 1.75% of tightening is expected by the time the committee finishes its tightening cycle early next year. The combination of continued Fed tightening and elevated inflation, which has caused real personal income to contract in recent quarters, will likely lead to retrenchment in real consumer spending beginning in Q1-2023. Weakness in consumer spending and the continued squeeze on profit margins will then likely lead businesses to cut business investment spending, both fixed investment and inventories, and reduce payrolls. The slowdowns, if not outright economic contractions, forecast in some key U.S. trading partners should also weigh on growth in American exports. U.S. real GDP should contract for three consecutive quarters beginning in Q1-2023.

But this downturn is not likely to be especially deep or prolonged. The underlying fundamentals of the economy, especially the relative strength of balance sheets and the labor market, are reasonably sound at present. Moreover, the Federal Reserve may indeed be able to pull off a “soft landing.” However, the Fed’s hawkish view and the demonstrated difficulty of actually engineering a “soft landing” make recession next year more likely than not. We will continue to analyze economic data as it is reported and update our outlook as we get more information.

Recap: Many of the major factors that negatively impacted capital markets in the second quarter, continued to play a dominant role in roiling markets in the third quarter. Soaring inflation, rising interest rates, a strong U.S. dollar, declining consumer sentiment, a tight labor market, a pullback in the U.S. housing market, the war in Ukraine, and supply chain issues continued to headline economic news. News out of China, the world’s second-largest economy suggests their economic growth is slowing rapidly and materially as well. And developments in Europe and the U.K. also signaled economic decline and potentially a recession on the near-term horizon. Analysts’ forecasts for corporate profits in the U.S. continued to decline during the quarter as the U.S economy slows. And as stock valuations have fallen, like last quarter, securities prices slipped into a sea of first-half 2022 red ink.

U.S. equities continued to give back some of the liquidity-driven easy gains achieved in the past few years when interest rates were near zero. The declines were less extreme in the third quarter than earlier in the year, perhaps due to greater clarity on the end of the Fed hiking cycle, more attractive relative equity valuations (with the S&P 500 price/earnings ratio lower than the past five and ten-year averages at less than 16 times earnings), and the strength of the U.S. dollar. The S&P 500 was down 4.3% while the broader measure of U.S. capitalizations, the Russell 3000, was down 4.5%. International equities struggled even more with the MSCI All Country World ex-U.S. down 9.9% in the quarter, Emerging Markets equities were down 11.6%, Europe was down 10.2%, Japan declined 7.7%, and China was down 22.5%. The MSCI Emerging Markets Latin America was up 3.6% in the third quarter.

Stylistically there was a reversal of fortune as Growth stocks modestly outpaced Value stocks though both retreated in the quarter. While U.S. stocks overwhelmingly turned in negative quarterly performances, small-cap growth stocks posted a surprising 0.24% positive gain for the quarter.

Bond values continued to retreat as interest rates rose in the quarter. The degree of the decline was driven by credit quality and maturity with lower quality holdings (e.g., high yield bonds) and longer-dated maturities taking a larger hit to prices.

Outlook: In a repeat of last quarter’s comments, the (near-term) outlook for equities does not seem particularly bright confronted with rising interest rates, declining profit growth, and ample uncertainty especially in Europe which still could be further hurt by soaring energy prices and the spread of war. Recessions around the world are definitely in the cards in the near term. Competing factors are likely to play an important role in market behavior, especially in stocks in the months ahead.

Near-term downside risks include what may well be a robust tax selling season as the year ends, souring investor sentiment, declining corporate profits, and what has become the ever-present geo-political risk surrounding the war in Europe.

Near-term positives include still solid business and consumer balance sheets, relatively lean corporate inventories that will need re-building when the economy turns up, and trillions in cash waiting to be invested. Additionally, a provision of the recently passed Inflation Reduction Act (IRA) was a 1% “buyback tax” levied on corporate stock buybacks. Companies planning such stock purchases may well choose to move those purchases into 2022 before the new tax goes into effect in 2023.

A longer-term view of markets suggests the tailwinds stock and bond investors enjoyed for the past decade including massive fiscal stimulus as well as declining and ultra-low interest rates will not likely come to the rescue of the markets. Securities values are more likely to be driven by the organic operational successes of businesses and not because “there is no alternative” to owning stocks. Market volatility could well remain elevated in comparison to recent years which could also help create new opportunities for investors.

Even with the uncertainty surrounding our short-term outlook it is important to remember that investors have consistently been rewarded for staying invested throughout economic cycles. As the following charts show recessions are typically short when compared to expansion, investing when the market is down more than 25% has been rewarded over time, and despite average intra year declines of 14% the S&P 500 has had positive returns 76% of the time since 1980. 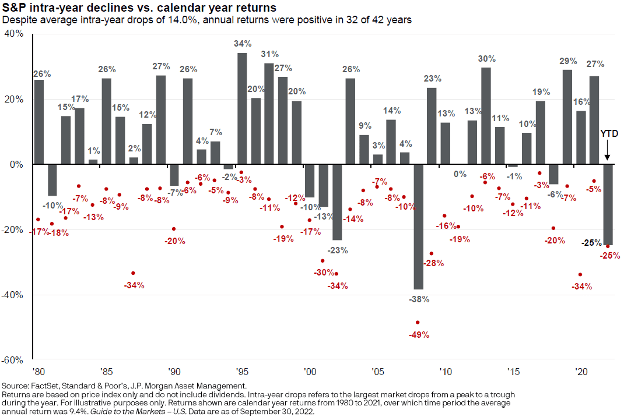 We know this has been a difficult year for everyone, we will continue to adjust portfolios based on the investment environment and our outlook. Please do not hesitate to reach out if you would like to discuss your specific portfolio or our strategy going forward.